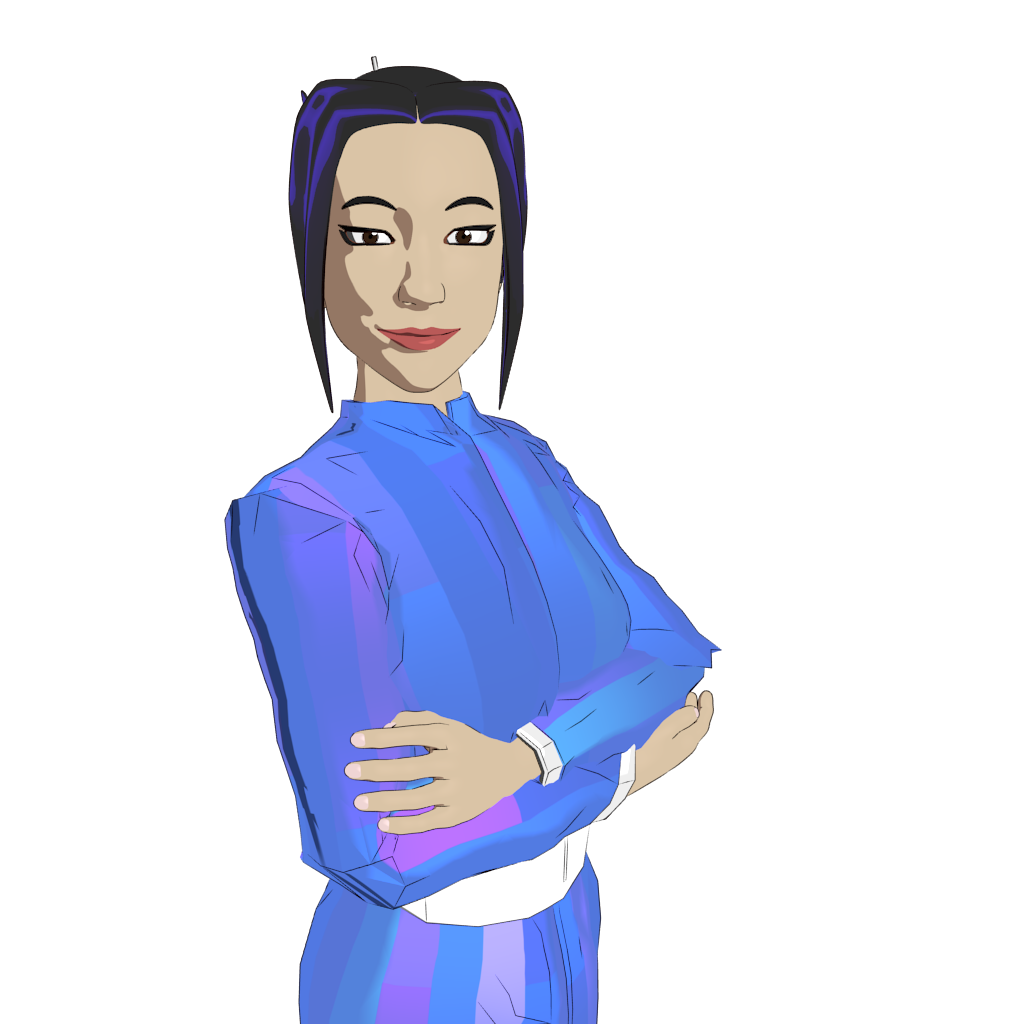 Hiromi Lerner was a medical student and a concert pianist when she first learned about the International Space Foundation's project to put a colony on the Moon.

She's had a life-long interest in space (stemming partly from her father, who owns a small aerospace business in Torrance, California), but her main motivation is to humanize the project and establish a comfortable home on the Moon. She idolizes her husband Rob Lerner, but also recognizes that he often has his head in the clouds, and is not always the most stable man. She does a lot to keep him grounded.

She's a traditionalist when it comes to home, decor, and fashion, and has an active artistic interest in integrating Japanese traditionalist aesthetics with her technological lifestyle. She also sometimes sees herself in terms of American western pioneers, who she feels a lot of connection with as a pioneer on a new frontier. 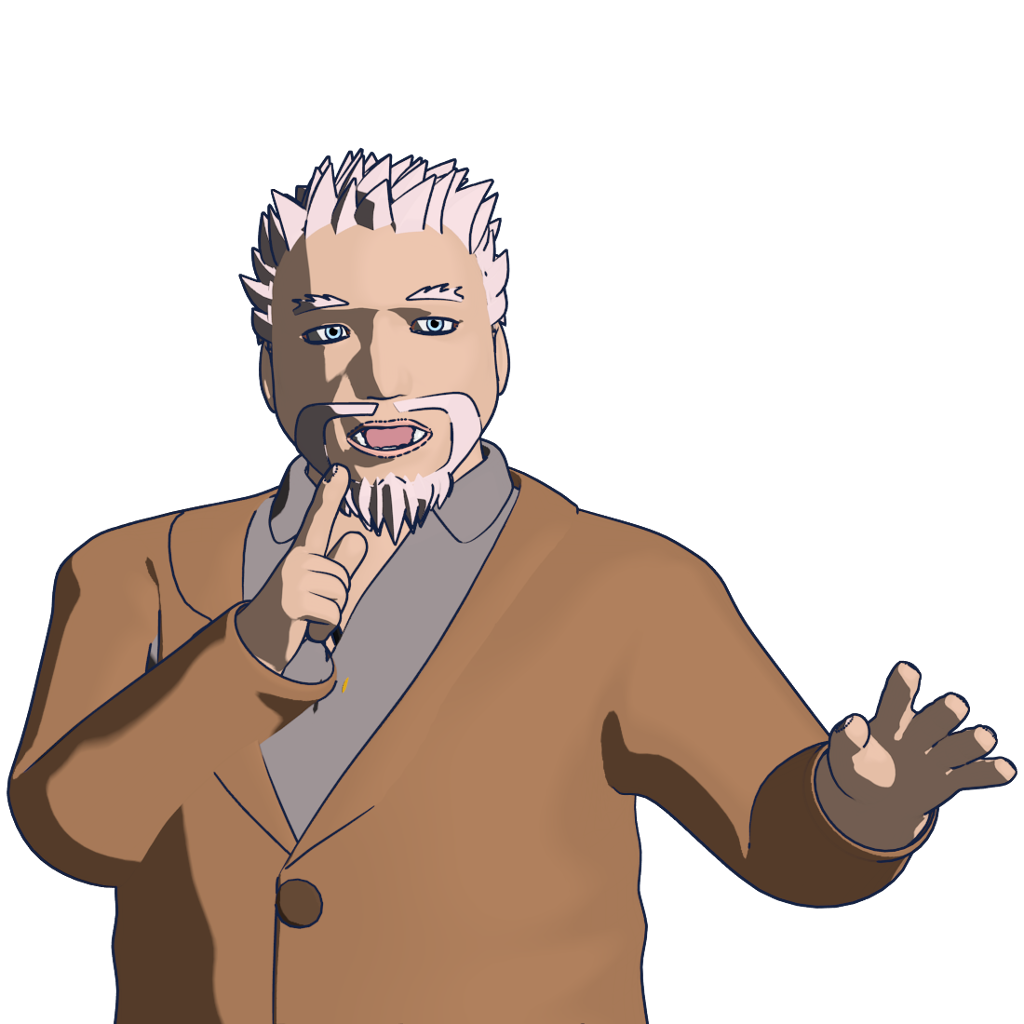 Rob Lerner is a dreamer who has always been fascinated with the idea of living on another world. He grew up reading (and watching) science fiction, and chose mechanical engineering as a major in college. He's originally from Texas, although he's lived in many parts of the US Southwest during his life.

He tends to be focused on big picture ideas, although he can also become bogged down in technical details and tends to see problems through his engineering lens, which sometimes leads him to struggle with more organic problems. His personality is somewhat mercurial, prone to manic obsessions and depression when things don't work out as he hopes.

He has a great enthusiasm for humanity in the abstract, but often finds real individual humans hard to get along with. He doesn't quite understand what he did to deserve the loyalty and affection of Hiromi, but he's determined to keep doing it.

He founded the International Space Foundation which sponsors the colony, and his place there is largely connected to that status. He's seen as a kind of spiritual leader to the rest, but isn't necessarily formally in charge. 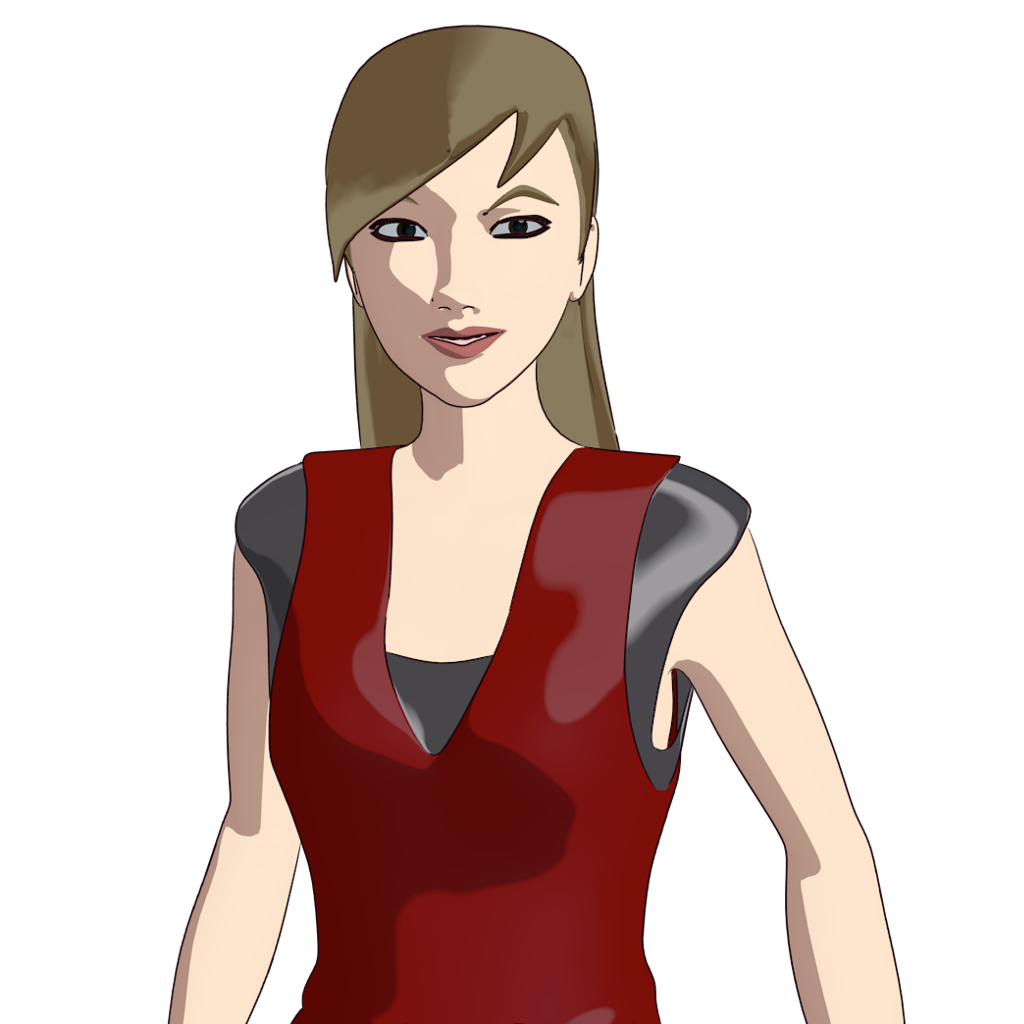 Anya Titova (also known as Anya Farmer or Anya Titova-Farmer, but she uses her well-known maiden name professionally) is the youngest child and only daughter of the billionaire co-owner of a major space company (RK Cosmos), Anatoly Titov (his brother Konstantin is also a major shareholder, as well being largely in charge of research and development), and granddaughter of Igor Titov who founded the company.

Unlike her older brothers, Sergei and Gregor, she was not pressured to work as a cosmonaut, although she has had extensive pilot training as a kind of family expectation.

She's lived a very privileged life, and was very much a rich party girl in her youth. She liked fast cars and flashy technology, but has increasingly wanted to make an identity for herself. In her early twenties, she established her own satellite company, and has used the profits to press her new interest in space development.

She met Josh Farmer at a conference on space agriculture sponsored by Rob Lerner's ISF, and there was immediate chemistry her and Josh, which led to them getting married and having a child not long after. But Anya never really slowed down in her career, simply turning her efforts more and more directly towards the ISF project.

Her family regards her interest in this project amusingly "domestic", and tease her about it, but this will not stop her. The more menial aspects of frontier life are a hard challenge for her to adapt to, but she's managing.

She and Rob became co-conspirators on founding the project, and she largely brought in the money and the corporate connections to make it happen -- partly on the condition that she and her family are in on this first colony. 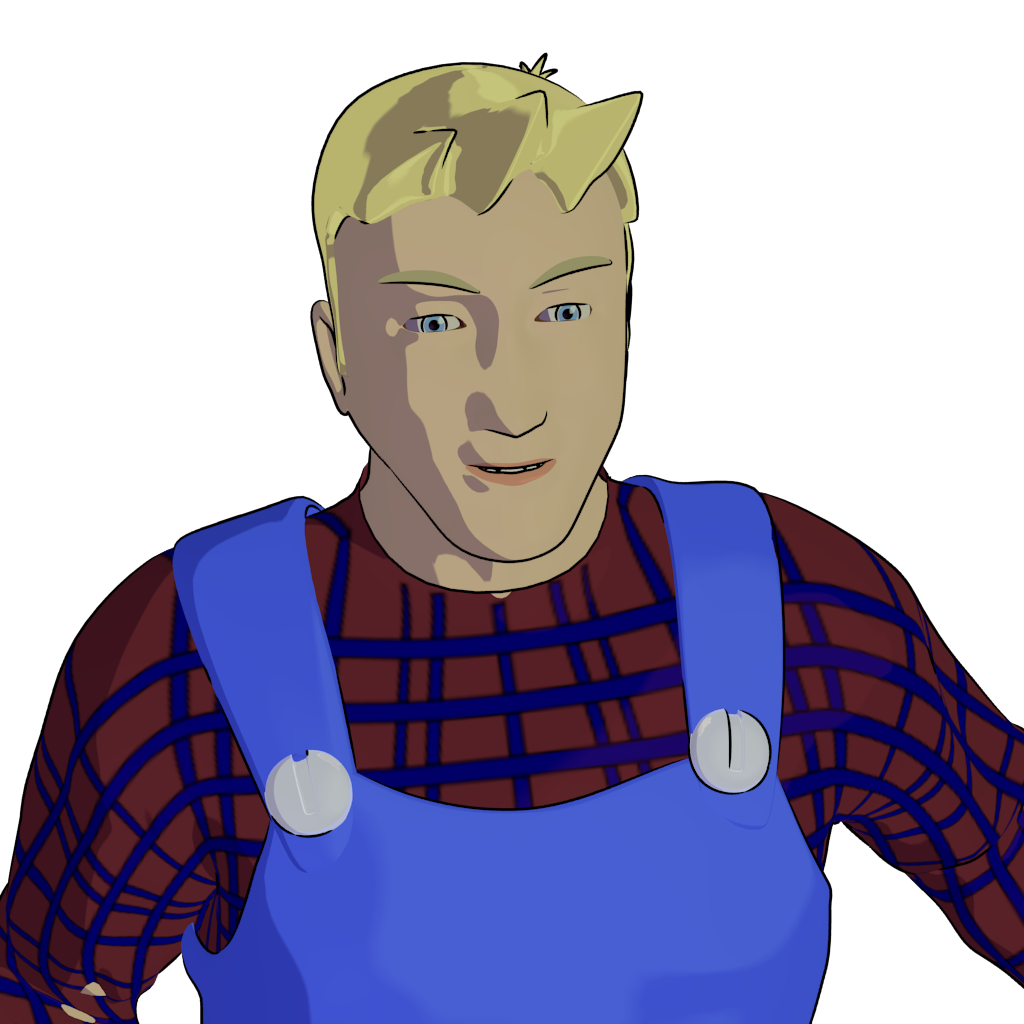 Josh Farmer is amused at his appropriate name, as he is indeed from a family of Farmers in the US Midwest. He has a lot of Middle-American attitudes and values, but he is the one who went to college. In fact, he has a doctorate in agricultural science, though he doesn't really like to be called "Doctor Farmer".

His specialty is space agriculture, and he knows just about everything that anyone knows about how to grow crops in space, and he's got a pretty fair knowledge of animal husbandry as well, largely from his youth, growing up on a farm.

He and his wife Anya seem like complete opposites, but in fact, they share a lot of basic values, and so their relationship is more complementary than oppositional. But it's no question that Josh's quiet stoic outlook on life makes an intense contrast with Anya's firebrand personality and outspokenness.

Rob Lerner recruited Josh early on in the Lunar Independent Biospherics Research Experiment (LIBRE) -- the Earthly prototype the ISF colony is based on, early on, and he has been instrumental to the planning and operation of the project. 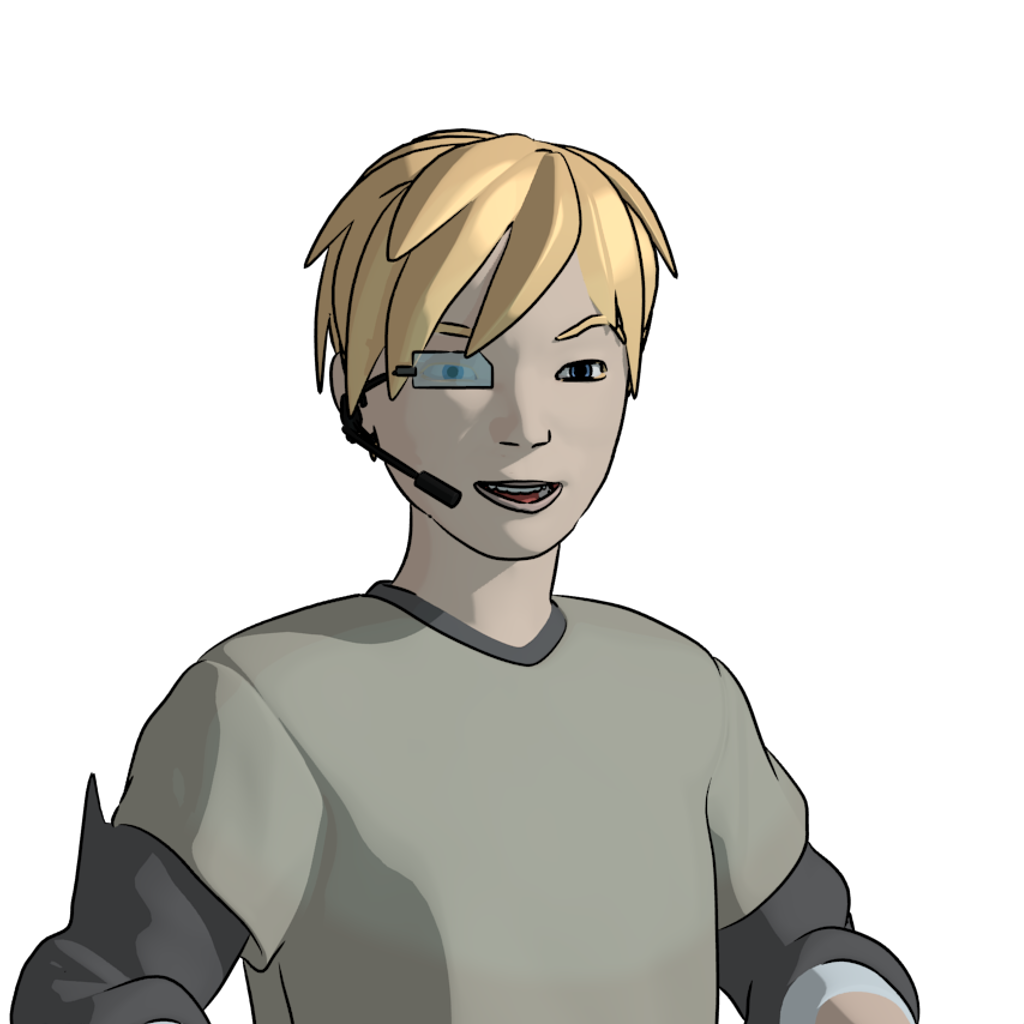 Tim does not like his first name, Igor, which Anya gave him in honor of his great-grandfather, and prefers to stick with Tim. His mother still calls him "Igor", though.

He did not exactly choose to be a Lunar colonist, though his chosen form of rebellion (promoting Mars colonization) betrays a bit of his pride in his family and situation. It's also true that he was old enough to have stayed with one of his uncles' families had he really not wanted to go.

He is very much aware of the social deprivation of being "literally the only teenager on the entire planet", and he spends a lot of his time online, interacting with his friends in VR communities on the "Great Global Grid" which he jokes is now th "Great Galactic Grid". He has a large following online, including a lot of teenage girls, who he has a not-entirely-ethical attitude towards, much to his mother's frustration, and a somewhat unhealthy connection to a piece of anime-inspired "virtual girlfriend" software, known as "Momo Aiai".

He spends a lot of time hanging out with Georgiana, who is a little like a sister, given how close their living arrangements are, but they're too far apart in age to have really common interests. 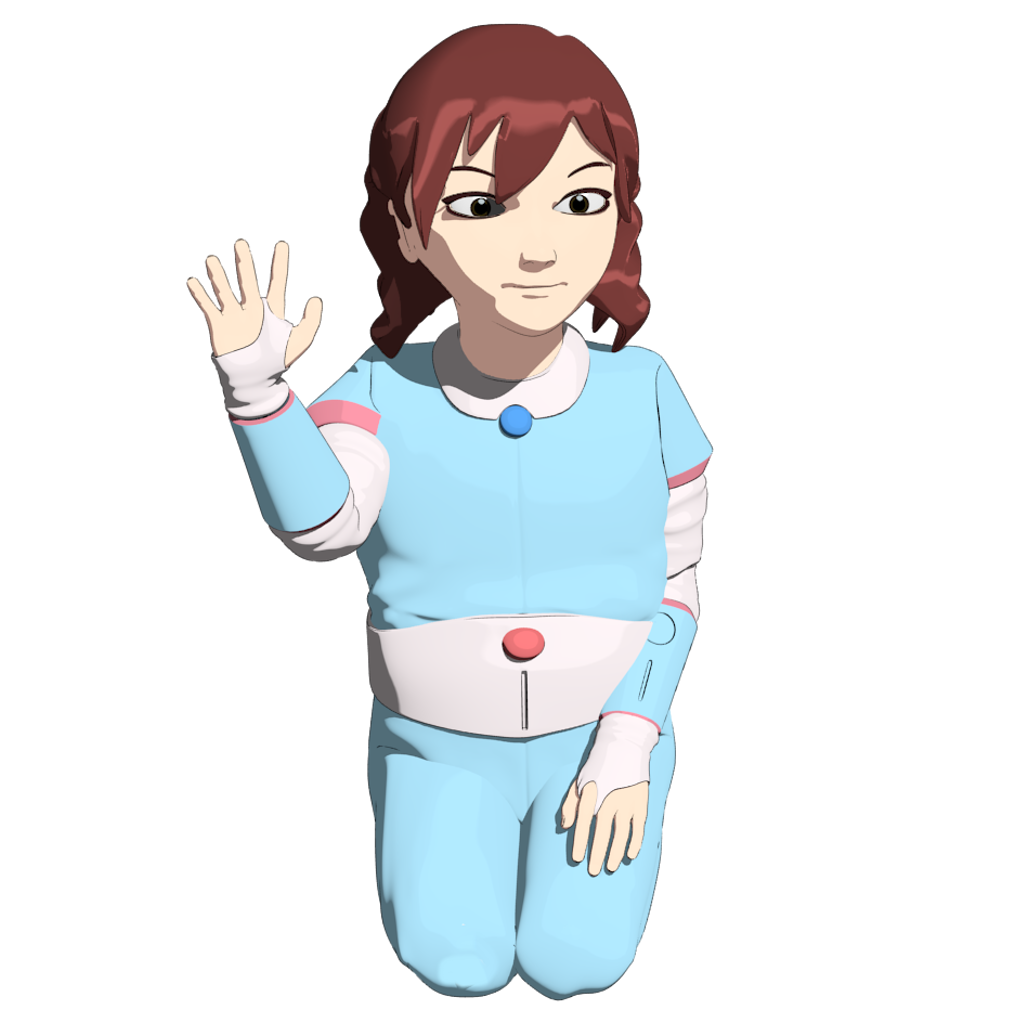 Georgiana is a very quiet, introspective girl, who likes to play with her bunny doll and secretly misses Earth, though she's also excited about the prospect of living on the Moon, and doesn't want to disappoint her parents.

She's still at a young enough age for magical thinking, and sometimes invents her own "mythology" to explain how her world works, ranging from insightful to woefully incorrect, as with most children her age.

She's eager to learn new skills and adapts pretty quickly to life in the colony.